What Whiskey Is Best For Whiskey Sour

How To Make Jello Shots With Vodka Recipe

What’s The Best Tequila On The Market

What Mixed Drinks Use Tequila

Castle and Key Small Batch Bourbon Batch 1 Review! The wait is over!

Castle & Key is steeped in Kentucky distilling history, and yet also presents a reimagining of Kentucky spirits for the future. In 2014, the Castle & Key team began restoring The Old Taylor Distillery, which had fallen to ruin after decades of neglect, with a vision of creating an immersive distillery experience.

Today, the Castle & Key team, led by Co-Founder Will Arvin alongside Research & Development Manager, Jon Brown, and Head Blender, Brett Connors, are committed to identifying the best barrels for production each year.

Located at 4445 McCracken Pike, Frankfort, KY, Castle & Key has become a popular travel destination for spirits and history enthusiasts as it offers tours of the many historical parts of the property including, the Boiler Room, Taylorton Station, the Springhouse and the Botanical Trail. For more information visit www.CastleandKey.com.

Castle & Key Distillery, out of Frankfurt, Kentucky, reopened its operation of the Old Taylor Distillery in 2014, which had been shuttered for decades. Therefore, its new bourbon is just finally coming of age. The release actually features two expressions of Castle and Key Bourbon Whiskey. That is, Castle & Key Small Batch Bourbon Whiskey 2022 Batch #1 and Batch #2.

Originally built in 1887 by Col. E.H. Taylor, the man who most bourbon enthusiasts recognize from the bourbon with his likeness. However, hes often referred to as the Father of Modern Bourbon. Hes also one of the chief architects of the 1897 Bottled-in-Bond Act.

Needless to say, this bourbon has some big shoes to fill. The anticipation certainly has the bourbon community hyped about this new bourbon. Details including the release, review, tasting notes, price, proof, and where to buy this bourbon will help bourbon hunters score this new juice.

This anticipated drop is featured on our bourbon release calendar for the month of March and also May, to coincide with each batch. We review everything whiskey lovers need to know from price to proof.

WERE THRILLED TO ANNOUNCE THE RELEASE OF CASTLE & KEYS FIRST BOURBON. WE BELIEVE THIS DEBUT STAYS TRUE TO OUR COMMITMENT OF REIMAGINING KENTUCKY SPIRITS BY IDENTIFYING THE BEST BARRELS FOR PRODUCTION EACH YEAR BASED ON QUALITY, NOT CONSISTENCY OF FLAVOR.

It starts rather light and unassuming, but slowly builds more structure and depth with a bit of time and air. The aroma stays a bit on the light side with low spice and oak notes and is kind of meh. Where the excitement centers on this one is with the palate that hits a bit like a Jack-In-The-Box. First poured its mellow and sweet and youre sipping along easily and then BAM. Spice and dill pop through the senses and the whole thing comes together.

With water the Castle and Key Restoration Rye picks up a tad more corn sweetness on the nose and some extra herbal and biscuity notes on the palate, but on the whole not a major shift. Its awesome to see them rolling out with a good initial product and set a nice precedent for whats to come and the quality to expect. On top of being a decent sipper, I can see this being a GREAT Old Fashioned or Sazerac mixer. Way to go C& K.

*Disclosure: The sample for this Castle and Key Restoration Rye review was graciously sent to me by the company without obligation. The views, opinions, and tasting notes are 100% my own.

One heck of an initial offering from the new kid on the block. A nice, flavorful, rye thats easy to sip on its own or used to amp up a cocktail.

Read Also: What To Do With Tequila

The 2022 Castle & Key Small Batch Bourbon Batch 1 release will become available at the distillery starting March 26th. Be prepared for a long wait. The good news is that they serve drinks and cocktails on the premises.

The 2022 Castle & Key Bourbon Batch 2 release is popping up will become available starting in May, 2022. 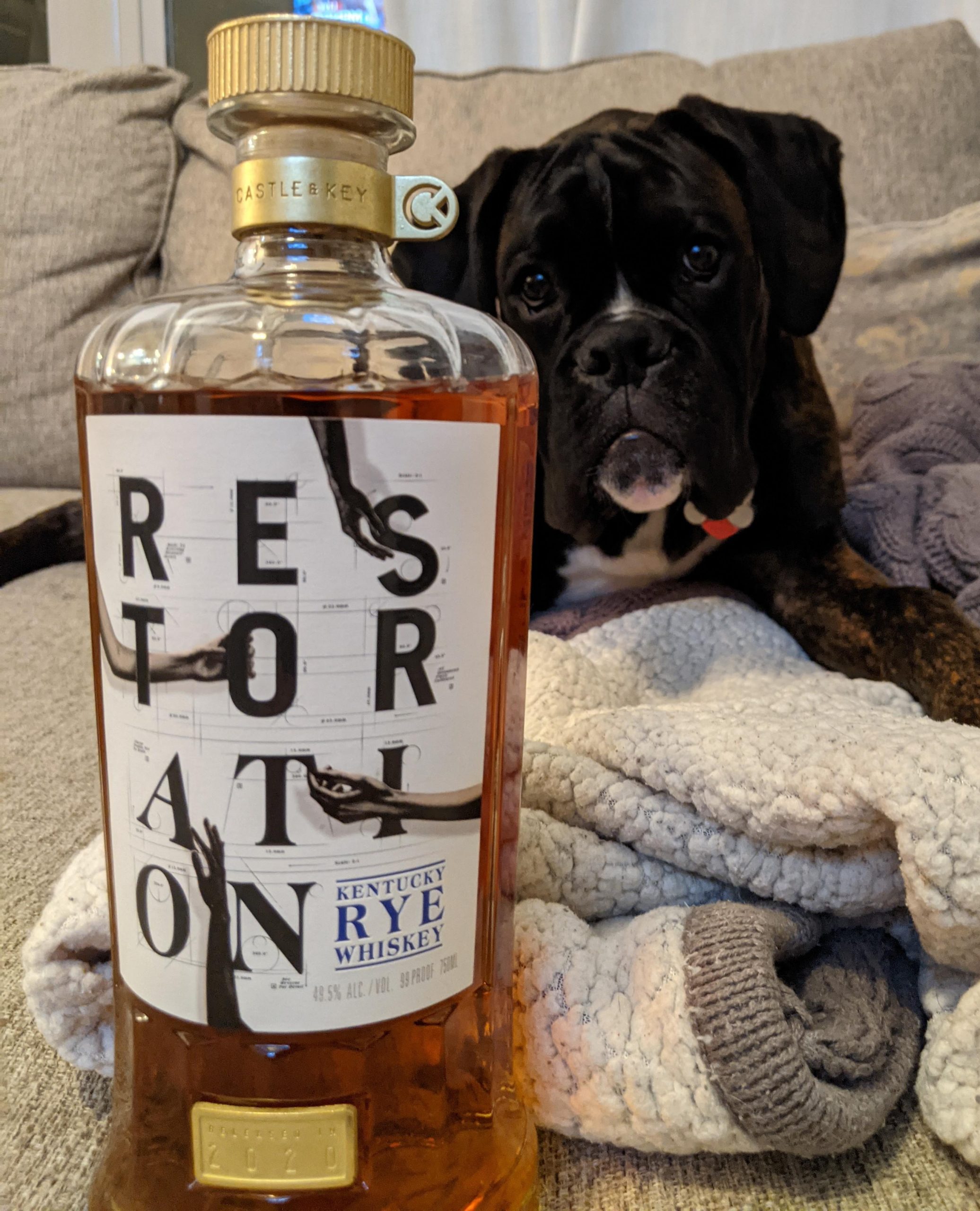 Castle and Key Restoration Rye is the perfectly named release from the resurrected Old Taylor Distillery which was built by Colonel Edmund Haynes Taylor Jr. himself. A man with deep historical influence on the bourbon world and who is known today through his namesake whiskey E.H. Taylor. A brand and name thats changed many times over the years and currently resides with Buffalo Trace.

The distillery was purchased in 2014 by Will Arvin and Wes Murry and over the course of two years they restored the historic distillery and began distilling in 2016. In 2020 they released their first products to the market and this rye was one of them. A ton of work went into getting everything up and running again and putting something out on the market. So lets get to drinkin and see what the fruits of their labor have yielded.

Recommended Reading: What Is The Most Expensive Don Julio Tequila

This 2022 Castle & Key Small Batch Bourbon 2022 Batch #1 is available in a 750ml bottle. It should be noted that this bottle design is one the nicest designs on the market. Castle & Key bourbon has an MSRP of $50.

Suggested retail pricing is officially set for $50. However, with the anticipated around this hyped release, flippers are already trying to capitalize on an inflated secondary price on the Castle & Key Small Batch Bourbon 2022 Batch #1 for sale.

Be sure to and to see all of our latest Bourbon Accessories, New Gear, Shirts, and other fun stuffas theyre released!

We recently took our daughter and friend to tour the Castle & Key Distillery – based at the former Old Taylor Distillery in Frankfort, Kentucky. In typical fashion – to tour the historic grounds prior to the tour- we arrived 45 minutes early. As we noticed a line forming outside the property. Could they be releasing something special? Did we arrive in time? Indeed they were releasing something special, and, indeed, we were in line in time to snag one of the limited run of Castle & Key Bourbon Small Batch #2.

In 2014, partners Will Arvin and Wes Murry purchased the abandoned Old Taylor Distillery and began their renovation efforts. Upwards of $30 million later, the site is truly one of the bourbon gems in Kentucky. As they reclaimed the facility from what the pickers, salvagers, and Mother Nature had left, one unique find was an original bottle of Old Taylor bourbon, distilled in 1917, and buried behind a wall.

While we missed the 1st batch of Castle & Key Bourbon Small Batch, this sample is from Batch #2 and bottle number 6699. The heavy glass bottle, with a stopper fashioned after the chandelier in the Grecian-style springhouse, carries a 4-year age statement. The mash bill is 73% white corn, 10% rye, and 17% malted barley. Batch #2 was blended from about 80 barrels and bottled at 99 proof.

Read Also: Is Pinnacle Vodka Made From Potatoes

I would pair this Bourbon with a cigar that has rich notes of vanilla and chocolate in the smoke. I would reach for a My Father The Judge cigar.

The Castle & Key Distillery is the new name for the Old Taylor Distillery in Woodford County. Kentucky. Even though Buffalo Trace owns the Old Taylor brand, the folks at Castle & Key Distillery still want to pay silent homage to Col. E.H. Taylor, Jr. When I cataloged the Taylor-Hay Papers at the Filson Historical Society, I found out that Taylor used only white corn to make his Bourbon. He also bragged that he used two and a half times more barley malt than any other distiller. Looking at grains purchased by Taylor at the O.F.C. Distillery, I estimated that his whiskey was about 65% white corn, 15% rye and 20% malted barley. When Castle & Key started making Bourbon, their mash bill was very similar to what I thought Taylors might have been. They use white corn and about 20% malted barley. The result is a Bourbon that is a little different from other Bourbons made by Kentuckys major distillers. Matt and I tasted this first release of Castle & Key Bourbon and here are our notes.

Recommended Reading: How Much Does Pinnacle Vodka Cost

How Much Does Casamigos Tequila Cost

How Do You Make An Old Fashioned With Whiskey

What Is The Best Puerto Rican Rum

Where Can I Buy Crystal Head Vodka

What Do You Mix With Orange Vodka

Does Skyy Vodka Have Sugar

Does Grey Goose Vodka Have Carbs

Where Can I Buy Dulce Vida Tequila

Where To Buy Havana Club Rum

Is There Sugar In Smirnoff Flavored Vodka