Where Is Tincup Whiskey Made

The Company Has Set Up A Tracking Adventure

As part of a marketing campaign, the Tin Cup Whiskey company set up a fun tracking adventure in which potential customers can participate. The company has released 2,000 trackable tin cups to various locations across the globe for their customers to find using geocaching in a GPS-enabled treasure hunting game.

It Is A Spicy Bourbon With Complex Flavors

The company describe their whiskey as a spicy bourbon. This has a range of complex flavors, including cinnamon, vanilla, orange, and pepper. They recommend that you drink Tin Cup Whiskey over ice to fully appreciate the depth of flavor in this bourbon whiskey. However, they also say it makes a great mixer and even offer recipes on their website for you to try using this whiskey as an ingredient in your cooking.

Some areas of the country are more well known for their whiskey production than others. Kentucky, for example, is lousy with distilleries both of the legal and illegal variety. Colorado isnt particularly known for their distilling prowess brewing, yes distilling not so much. But there are a few brands coming out of this state and starting to make some noise including the one were checking out today: Colorado-based Tincup.

Whiskeys from out west have been hitting the market and getting good reviews more and more over the past few years. High West, Breckenridge Distillery, Templeton, and Ranger Creek have all been proving that you dont have to be from Kentucky to know good and make good bourbon. Tincup American Whiskey from Colorado seems to be looking to join those making news from West of the Mississippi. Jess Graber is the man behind Tincup. In researching this whiskey I learned that Graber is the co-founder of Stranahans Colorado Whiskey which is made in small batches in Denver. I have never had Stranahans but the small batch nature of the whiskey means that it is expensive and harder to come by. Right now it isnt available outside of Colorado. Tincup Whiskey is a separate brand from Stranahans, , but knowing about this back story helped me make sense of Tincup and how it came to be.

So what about Tincup American Whiskey?

It meets the technical definition of bourbon but for marketing reasons they are sticking with calling a whiskey. It has a higher rye mash bill and is cut with that Rocky Mountain Whiskey to 84 proof. The mash bill isnt on the website but I have read others that say that it is 64% corn, 32% rye, and 4% malted barley. I have no problem in admitting that this is one of the prettiest whiskey bottles Ive seen. I love the art deco look and the tin cup cover that can double as a cup.

But lets get down to our Tincup American Whiskey review and tasting notes.

The Hexagon Bottle Shape Is Designed For The Outdoors 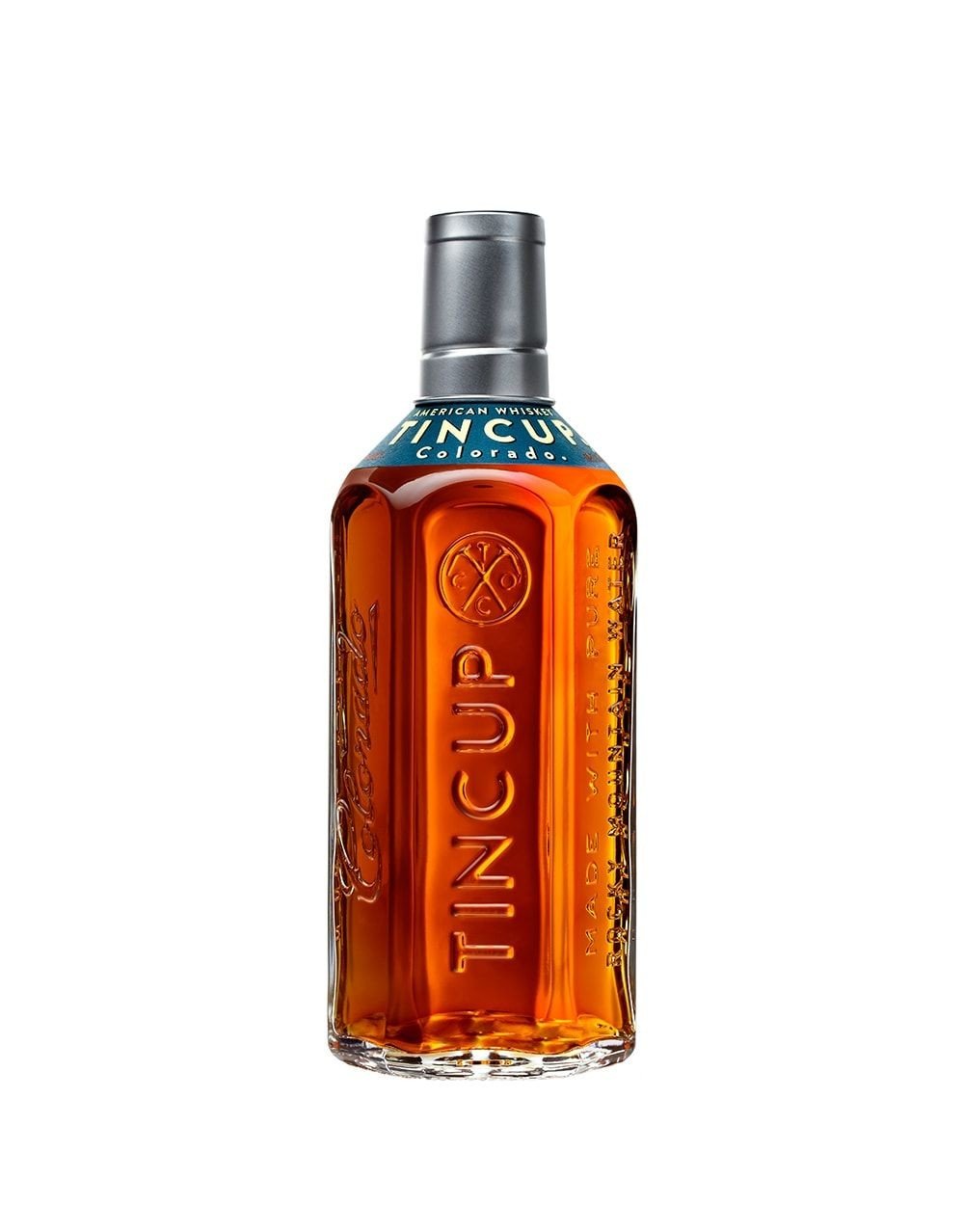 The bottle of Tin Cup Whiskey is a hexagonal shape. While this is a visually appealing feature of the bottle design, it has a purpose beyond its aesthetic qualities. As the whiskey is targeted at people who enjoy the outdoors, the bottle has been designed with drinking outside in mind. The shape prevents the bottle from rolling down a hill as you can lie it flat on its side in a small space.

But despite all the marketing about Colorado, Tincup isn’t actually distilled here — and isn’t connected to the state’s craft distilling movement in any way. Rather, it is made in Indiana with Midwest grains and then shipped to Colorado where it is cut with local water and bottled at the Stranahan’s plant.

See also:Stranahan’s Colorado Whiskey has been sold to an East Coast liquor distributor

The reason is because it costs less to distill in Indiana, which keeps the cost of the product down, Graber explains. Cutting it with Colorado water, however, is important. “I’m proud,” he says. “It’s a real good whiskey, I wouldn’t stand behind something that wasn’t good.”

Both Tincup and Stranahan’s are owned by Proximo Spirits, a New Jersey/New York based liquor importer that also owns 1800 Tequila, Three Olives Vodka, and Kraken Rum. The company acquired Stranahan’s in 2010. But Tincup is more accessible than Stranahan’s, costing $27.99 a bottle, or about half the price of its Colorado cousin.

“It’s a natural outgrowth of Stranahan’s,” Graber says about Tincup, adding that making a bourbon like Tincup was something he’d wanted to do for more than a decade. Made with a blend of corn, rye and malt, and cut with Rocky Mountain water, Tincup’s high rye content gives it a spicier flavor than most bourbons.

Its always nice to see something reach its potential. For Tin Cup whiskey, the Colorado blend of bourbon and American single malt, it took just 10 years, but the wait was worth it. Tin Cup 10 is on the market now and we think its the perfect next bottle for anyone trying to expand their American whiskey library and knowledge beyond bourbon.

American Whiskey is a sort of catch-all term for everything that qualifies as whiskey but doesnt meet other standards, such as those for bourbon and rye. Two decades ago that would have implied a lack of quality. But in 2018, American Whiskey simply means innovation: people are playing their best games right now outside the confines of regulated categories.

Case in point: Tin Cup 10. Its the bottle youll want to test the waters with if youre a bourbon lover braving uncharted territory.

Its great for transition because, well, the process to make it starts with bourbon. Tin Cup is an American whiskey with a bourbon mash bill of 64 percent corn, 32 percent rye, and 4 percent malted barley sourced from MGP in Indiana. A small percentage of Stranahans Colorado Whiskey is added to the product . Once it has aged, its cut with Rocky Mountain water and bottled.

Tin Cup was admittedly never our favorite whiskeyit was tasty enough for cocktails but not much of a head turner when shopping for bottles. With this new limited-edition release, theyve made us look twice.

Where Is Tin Cup Mountain Whiskey Made

While Tincup is marketed as a Colorado product, it is not actually manufactured there, and has no connection to Indianas craft distilling movement. A Midwest grain has been ground in Indiana, and then the beer has been shipped to Colorado where it has been cut with local water and is then bottled at Stranahans.

The Bottle Cap Is Usable

If you have ever bought Tin Cup Whiskey, you might have noticed that the bottle top is in the shape of a miniature tin cup. While this has been designed as part of the theme to coordinate with the brand name, it also has a functional purpose. You can use the cap as a measure or to drink the whiskey straight as a shot.

DENVER, Colorado TINCUP, the Mountain Whiskey, is proud to introduceIn celebration of the launch, the brand is putting a spotlight on notable adventure duos through the release of its new Partner In Adventure campaign, which brings to life true stories of adventure and the powerful bonds forged when people come together in its pursuit. TINCUP is encouraging consumers and their partners in adventure to share their stories for the chance to win an adventure exploring the Rocky Mountains and the rugged town of Tin Cup, Colorado.

TINCUP Rye is a straight rye whiskey, distilled and aged for three years before being cut to proof with Rocky Mountain water. It has been crafted to honor the original rye recipes that were enjoyed by settlers and miners in Gunnison County. The brand takes its name and inspiration from Tin Cup a mining town founded there in 1879 on the Western slope of Colorado, in the adjacent valley to where Jess Graber, founder of TINCUP Whiskey, first began distilling. Following a day within the depths of the mines, the resident workers of Tin Cup would often watch the sun go down with rye whiskey in hand.

TINCUP Rye is a salute to American whiskey tradition, said Graber. In the early days before prohibition, rye was the predominant spirit available and the drink of choice for Colorados mining pioneers. Our newest whiskey is a toast to those bold individuals and their partners in adventure and exploration.

The Name Comes From Mining Traditions

The name Tin Cup Whiskey is inspired by the mining traditions of Colorado. Throughout history, the miners in this state would take a tin cup with them to work from which they would drink. At the end of the day, their beverage of preference was usually whiskey. Gerber chose the name to reflect the history and traditions of the Colorado mountains.

This week Indy and Denver fans may be at odds, but this whiskey collaboration proves that when Colts and Broncos get together they can make something great. What am I talking about? Im talking about Tincup Whiskey and its a beautiful blend.

Tincup American Whiskey is distilled in Lawrenceburg, Indiana at the MGP Ingredients facility. The whiskey mash is 65% corn, 32% rye and 4% malted barley distilled in copper stills, then aged for four to five years in new charred white oak barrels. After the aging process, the whiskey is batched and blended for consistency.

Once the distilling and aging processes are complete, Tincup is shipped to Denver for the final touches. In Colorado, authentic Rocky Mountain water is used to cut the whiskey. The mineral-heavy water adds a nice crisp clarity to the product. Then its bottled at 84 proof and labeled for purchasing.

The package appearance is very unique among the various whiskey and bourbons out there. The top is an actual tin cup, which turns out to be quite useful for sipping and sharing. The rugged hexagon-shaped box mimics the iconic Rocky Mountains. The name Tincup comes from an old mining town in Gunnison County, Colorado where tin cups were used by the miners.

Tincup gives off a delicious spicy aroma with strong notes of cinnamon and butterscotch.

The finish is long with the lingering cinnamon flavor. Tincup has a surprisingly smooth and sultry taste for such a robust whiskey. 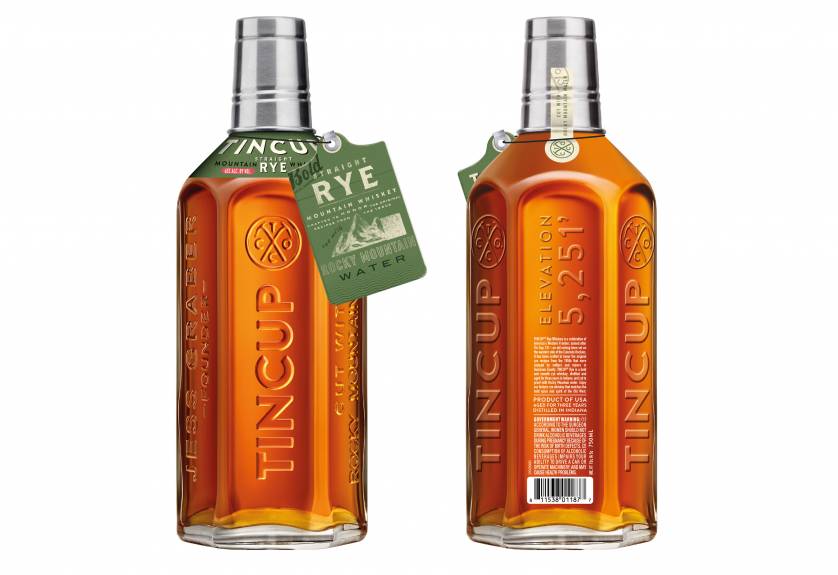